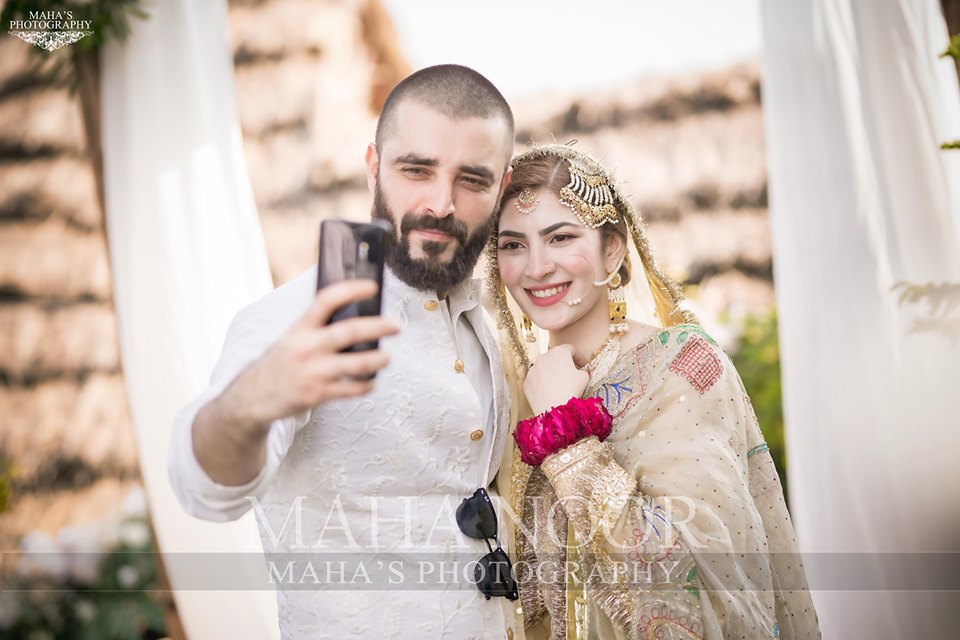 Stunning pictures, videos, and totally cool boomerangs have stormed the social media in the last two days and you guys already know why!

Yeap. The actor/activist ‘Hamza Ali Abbasi’ got married to the Anaa star ‘Naimal Khawar’ on 25th August 2019 and had their valima the next day.

Without further ado, here are the main highlights from their sweet journey as friends to soul mates.

Interestingly, the newest couple on the block is rather unconventional when it comes to describing their love story, their wedding preparations as well as the wedding events. You ask why?

Clearly, ‘austerity and simplicity’ is the couple’s backbone, unlike 90% of the other Pakistani media industry celebs!

I mean, check out the wedding invitation!

From friends to soul mates: The Lamba Paragraph you should read too!

Additionally, after being trolled by fans as well as critics, Hamza Ali Abbasi took the liberty to post another ‘lamba paragraph’ under the caption ‘Mera Accnt, Meri Marzi’!!!

Moving forward, here is a glimpse of their big day celebrations. Again, we are totally in love with their idea of a simple, Islamic Shaadi. Definitely a sight for sore eyes!

Surprisingly, Naimal Khawar chose to have a straightforward yet elegant Mayon at her house. The event was attended by family members and close friends only. Unfortunately, we are short on pictures to share with you guys!

Nonetheless, follow this link to get a glimpse of the highlights.
https://www.youtube.com/watch?v=HHQtAPLM1sc

In the meantime, Hamza Ali Abbasi had an intimate dholki of his own. It was rather a get together with friends, but meh! We will call it a dholki anyway.

Hamza’s best buddy Gohar Rasheed was obviously next to him followed by Yasir Jaswal, Uzair Jaswal, Ammara Hikmat and Bilal Lashari. They all ended up taking cool snaps and having Jessies burgers!

Indeed, it is true when they say ‘minimalism is an appreciation of space’ because plain-vanilla décor totally gained the spotlight at the duo’s Nikkah.

Under the perfect summer sun, on top of Islamabad’s awe-inspiring Margalla hills; our favorite August couple shared their vows at The Monal Restaurant.

To summarize, the Nikkah ceremony was attended by immediate family members and close friends only.

Both the mothers join the couple for an adorable memory to be cherished for a lifetime.

Dr.Fazeela Abbasi (groom’s sister) smiles for the camera with her son.

So was Usman Mukhtar.

And here’s the happy couple sealing their fate!

There was a ring exchanging ceremony too. Check out the close-up shot by B-Roll Studio.

The Valima took place today, on the 26th of August at the Serena Hotel. While Hamza Ali Abbasi chose to dress simply, Naimal was seen wearing a dress right out of a fairytale.

Surprisingly, the groom wore a black shalwar kameez with a self-colored waistcoat. On the other hand, the bride was draped in a #SFK (Sadaf Fawad Khan) white silky lehenga paired with a shimmering long shirt with loads of studs and embellishments on top.

Moreover, what’s better than ending the night with a crazy picture with close friends?

Nonetheless, take a glance at the complete Valima highlights below.

That’s all folks! Here’s wishing the new couple a happy married life from our whole team at Curryflow.