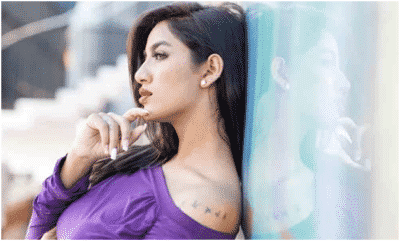 While flicking through T.V channels, it is hard not to avoid the multitude of the highly criticized, yet the masses’ favorite ‘morning shows’. Nestled among these shows was the famous show called ‘Love indicator’, which aired on Vibe T.V.

The channel not only introduced Mathira to the Pakistanis but oh boy, was it in for a surprise!

Mathira’s unique hosting style invited a lot of curiosity, adulation and criticism as did her choice of outfits. However, as like all other Pakistanis, we all made our conclusions and totally judged her based on shallow assumptions.

If you are from the same boat my friend, here’s what you need to know about Mathira to change your opinion!

She was Born and Bred in Zimbabwe

One of the factors that set Mathira apart from her counterparts is her accent and her soft voice. When she first appeared on Television, it was her laid-back style and her accent that caught the attention of the viewers.

Little does one know that she was born and bred in Harare, Zimbabwe. Her father is a South-African and her mother is a Pakistani. She was educated in Zimbabwe till the age of 15 when she had to move back to Pakistan after her parent’s divorce.

It was in Pakistan that she developed an interest in the entertainment industry and there has been no looking back since!

Mathira is seriously super-talented. She has not left any stone unturned as far as entertainment industry is concerned. She knows how to entertain!

From modelling to acting to hosting T.V shows and even dabbling with singing; Mathira has done it all.

She can currently be seen in a television drama called Naagin (Geo TV) where she is acing it all as being Mastaani!

She is Never Afraid to Speak Her Mind

If you are here to criticize Mathira, then be ready for a clap back!

Mathira knows how and when to speak her mind. Unlike other celebrities, she is not afraid to voice her thoughts boldly and openly. When people went after her following her divorce, she had the perfect answer to shut them up.

Base line is: Do not mess with Mathira!

She is the Kim Kardashian of Pakistan

Who doesn’t know Kim Kardashian? She is famous for a number of reasons and one of them is how she dresses and carries herself!

Mathira has been labeled as Kim Kardashian of Pakistan, owing to her body, confidence and her bold choices when it comes to dressing up. What’s cool about it is that despite getting a lot of flak for that, she is still carrying on, without a worry!

She Owns her Actions!

Mathira is a strong woman who knows what she is doing and never backs out. She owns what she does without any regrets.

She is a loving mother

While Mathira owns a totally bold side, very less people know how loving and caring she can be. Mathira’s son Aahil is 5 years old and she adores him to the moon and back.

Here’s a video for you all to witness!

Our message for the day is:

Never Judge a Book by Its Cover and This Certainly Holds True for Mathira!