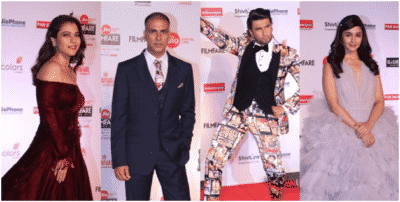 Bollywood: An industry synonymous to nothing less than glamour, fame, beauty, power, and let’s not forget; heaps of money!

As diehard fans, we are up to date with our favorite celebrities’ glossed up pictures streaming across social media, them acting as ideal role models, effortlessly draped in designer clothes all dolled up, never a flaw in sight!

Nonetheless my friends, if you believe that Kareena Kapoor by no means had a bad hair day or that Shahid Kapoor went straight from an angelic toddler to a stunner on screen; you are completely wrong! Just like us, skipping the awkward teenage phase was hard for them too. The cherry on top is how some of our favorite stars began their journey!

Before Deepika Padukone became the talk of the town because of her on-screen charm, elegance and totally perfect long legs, most of you won’t believe that her smile was probably the only thing she put to good use!

Don’t believe us? Take a look!

Yes! This is Deepika endorsing the brand ‘Close Up’ with her 1000 watts smile!

Check it out here:

Known as the ‘Khilaadi Kumar’ after his breakthrough Bollywood feature film Khilaadi 1992, Akshay Kumar has made a special place in the hearts of many fans.

Most of you might not know that Akshay Kumar took interest in martial arts and after saving tirelessly, Akshay’s father sent him to Thailand where he learnt Thai Boxing. While doing so, he struggled in Bangkok as a waiter and dishwasher to make ends meet.

Upon returning back to India, Akshay Kumar became a model and thereafter saw a promising future in the film industry.

Who could imagine him becoming one of the lead stars in Bollywood later!

The beautiful Bollywood starlet who recently married the Indian cricketer Virat Kohli was once a mere background actor!

Starring in ‘Spinz Talc commercial’ in 2008 as a junior artist lead her to attaining a lead role alongside King Khan in Rab ne bana di Jodi 2008.

Needless to say, her career took a kick start then onwards and we can all agree that no one else could have played a better role than Anushka in Band Baja Baraat 2010.

I bet you didn’t notice her when this commercial ran on the television!

Here’s a link to the whole commercial:

Hard work and pure determination can help you climb the steepest of mountains! This is true to the core in Ranveer Singh’s case.

Initially Ranveer worked as a copywriter for advertising agencies but dreamt of working as a lead actor. When surprisingly Ranbir Kapoor denied working in Band Baja Baraat in 2010 and the director was hunting for a fresh face, he settled with Ranveer Singh and the film became a super hit!

Who knew this ordinary student would land in the top ranked actors of Bollywood today?

Good looks and unique hair are not the only attributes one requires to enter the media industry.

Stepping her way into Bollywood through modeling, Kangana was not satisfied with the level of creativity and chances of growth in the modeling industry.

Later, when Kangana played a double role in a theatrical play due to her co-star being missing, the response from the audience urged her to go big on the screens!

Even though her family didn’t approve of her choices, she struggled and starred in amazing films like Gangster and Fashion. They reconciled later.