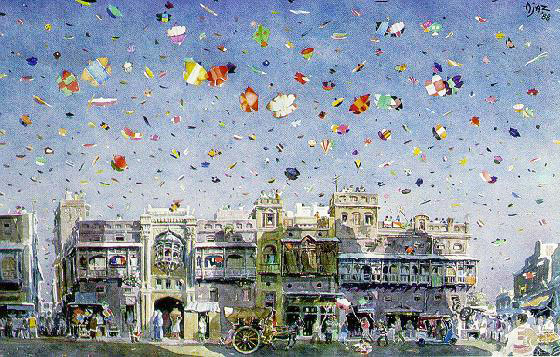 The waning interest in the movement for restoring Basant has become an distressing issue for a city in the midst of a diverging identity and culture. The indifferent tone adopted by the Punjab government has further quelled the probability of the festival being held, which invokes a melancholic tone considering the belief that Basant is as symbolic of archetypal Lahore as Oktoberfest is of Munich.

A painter’s perspective visualization of 20th century landscapes from notable metropolises from around the world will present an array of deviating scenery and atmosphere – a raw New York with the Statue of Liberty poised triumphantly over the scores of immigrant boarded on fume-emanating ships sailing towards Ellis Island, with a youthful Brooklyn Bridge stretching it’s arms to prevent two great islands from drifting apart; Detroit, with industrial fumes enveloping the skyline, with Cadillac whirling on the brick paved roads as fleets of workers head towards their livelihood in ere of the Great Depression; for Lahore, our particular muse, the clichéd perspective for much of our art history has been re-enactment of the bird-eye view of a canopy of rooftops snuggled between the trees of old, and a cluster of small stick figures hanging on invisible filament which sail onto a skyline decorated by kites of various colours, sizes and shapes, with the Badshahi Mosque and Lahore Fort lying in the close vicinity.

The history of Basant

The origins of Basant lie in the Hindu festival of Vasanta Panchami, a celebration of the end of winter and a homage to the Hindu Goddess Sarasvati.

As a foreteller of spring, a jubilant Basant has always epitomized the return of verve to the subcontinent’s most economically progressive province and it’s agrarian class. The festival is known for it’s myriad of colours and festivities. From the yellow kurtas signifying spirituality to the burgundy-jade bangles,  Basant eventually progressed each passing decade acclimatizing to new customs, practises and a growing commercial worth, becoming an industry cumulatively third only to the two Eid holidays in terms of economic value.

The month long celebration’s specialty has always been the oriental art of kite-flying. Groups of men of all ages have toiled hard with their threaded swords, with enough trickery and variety in method and application to be a worthy theme of a crafty Hemingway novel. Unfortunately, due to a drove of reasons, kite flying may well have become Lahore’s Lochness.

Each inhabitant of the walled city has his or her own story on the matter. The first, as with all issues vexatious, is the defiling of sporadic government policies. ‘The government has made a mockery of this celebration. For the last decade, no one knows if it is going to be celebrated or when it is happening. People have started to act indifferent.’ claims Asad Ali, a string and kite salesman nestled in the streets adjacent to the Gowalmandi mohalla. In 2005, Kite flying was banned in Pakistan due to safety reasons. The ban was shortly uplifted but due to a penetrative attack from stern religious parties claiming the Hindu origins of the festival, the ban was eventually reinstated.

Glass-coated and metal wires provide a stern advantage to the kite flyers, but have consequently played the guillotine to countless innocent lives. Furthermore, a copious number of children throughout the province have plunged to their untimely deaths engulfed in insatiability for a foiled sheet of printed polyester. Damage to infrastructure, such as wiring and electric installations is also a significant danger involved. Mehdi Hassan, the veteran journalist-political analyst adopts an aggressive stance, ‘There are many things people die of everyday, such as planes, car accidents, working on the road. More people are killed in those activities daily, so why don’t they ban those as well?’

The lower class has historically practiced the sport trotting through streets, crisscrossing the web of high voltage wires, running over idle tongas, with kites gyrating into overflowing manholes and dancing into the verandas of flanking market plazas and houses. Due to the recent government and police pressure, kite flying has become a far too knotty risk for this class. ‘There are a lot entertainment activities for the elite class, but the only thing which the poor had was two days of celebration in Basant’ further adds Hassan.

Competition for the Old

The emergence of a multitude of diverse activities and pastimes over the last decade, perhaps the single most culturally significant in terms of change and foreign influence since the country’s independence, has played a major role in Basant’s flagging popularity. Kite flying, in terms of the middle-upper class, has suffered due to increasing activities and a lifestyle based of goals and time maximisation. A trip to the Lahori Basant of the 1980’s would showcase a Trebia of string tugging gladiators striving for their hand in the war booty. ‘It was the era of one radio station and of one television channel and the rooftop was an escape from the monotony of daily life’,  recalls veteran fashion photographer Sajjad Ahmed. Imported events such as Valentine’s Day and Halloween have also taken a bite off the significance historically given to Basant.

The last few known practitioners still capable of celebrating of the festival, the liberal upper class, are surviving on the repute of their guest list and the presence of fine wine, rather than the quality of kite flying.

Parties in the legendary Salli mansion are now less about kites and more about an occasion. Fawad, a socialite and avid party-goer, claims, ‘Kite flying and celebration of Basant has becoming secondary to good food and socializing with classes. There are many Basant parties in which kite flying does not even take place, nor would many of these younger people know anything about it.’

There is a great deal pessimism about the probability of the festival being held this year. Whatever the outcome may be, one can expect two breed of city dwellers to come out with their paper and thread, ones with high-enough contacts and secluded rooftops – and the ones which can be classified amongst the increasingly rare breed of kite enthusiasts.  It is essential that such bona fide occasions are not rooted out from the calendar, and importantly, the minds of the new emerging generation. As life continues becoming quick and hectic in this evolving city, Basant brings with it an economically and socially refreshing change and an essential role in raising a positive mural of our nation in lands overseas.