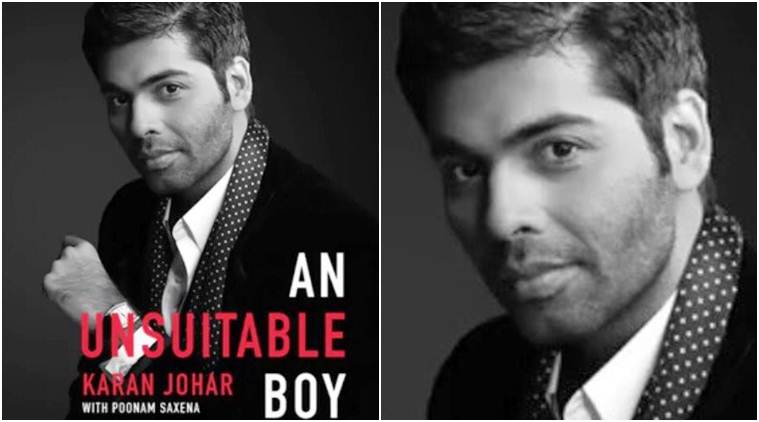 “I did enjoy Amar Akbar Anthony, but that angst, that whole angry young man’ phase was not my thing”.

But this is precisely what makes the autobiography seem believable and honest. It does not pretend to be a coherent, well-doctored piece of literature; at best it may be considered a long, structured stream-of-conscious that takes us from Johar’s childhood to his most recent film, Ae Dil Hai Mushkil.

‘An Unsuitable Boy’ is a 216-page one or two day brisk read. It’s never dull but never intends to sweep you off his feet either. The more controversial parts have already been drained by the media: Karan’s recent fallout with his longtime friend Kajol as well as his implicit acceptance of his sexual orientation. So, why would one want to grab a copy of this book?

Because it’s Karan Johar. K-Jo has been the object of a love-hate relationship with every moviegoer in India, a man of limited talents but just the right talent for the right time. K-Jo knows his strengths: emotions, glamour and the finer things in life. And it is in this qualities that he has managed to take what was once a struggling production house run by his father and turn it into the goliath it is today – Dharma Productions.

The book begins with Karan’s candid outpouring of both his weaknesses and his hypersensitive sensibilities. He narrates his journey from an under confident, over weight lone child being raised in South Bombay to becoming the biggest film producer in Bollywood.

The more interesting parts of the book arrive at the later, more relatable stages. There is a whole chapter dedicated to Shah Rukh Khan, one which openly discusses the distance that was formed when Karan started casting other leads in his feature films. There is also a whole chapter on his sexuality. Without revealing much beyond the usual quintessential autobiographical details (virginity and infidelity), Karan does get his message across: he is who is he is but he does not feel comfortable stating his sexual orientation. He calls it a ‘personal matter’, but later admits it to being a pragmatic decision, considering the hardliners in India waiting to pounce on all non-orthodox views on sex.

There are many familiar names in the book: from the Chopra’s and Bachchan’s to the Kapoor’s. Karan, being the son of Hindi film producer Yash Johar, spent his childhood with the crème de la crop of present-day Bollywood. For him, these stars were never untouchable icons (except Amit uncle, who he considers a demi-god), but for some reason that familiarity did not translate to Bollywood. For Karan, Bollywood was always much more than life, even when he had no aspirations to be a part of it.

The book takes us through all of Karan’s directorial features one by one, placing the most emphasis on the earlier ones of course. Throughout this narration one senses a growing ego, but one that is always kept under cheque. That is perhaps what surprises one the most about ‘An Unsuitable Boy’ – Karan’s surprising emotional intelligence and self-respect. His blunt honesty and self-reflexive in analyzing his true weaknesses. Even when he gloats about his contribution to the film industries and the stars he has nurtured, Karan is careful in not going overboard.

It may surprise one to see that he too views the debauchery and artificiality of Bollywood with a bad eye, considering many people blame him to be one of the prominent sources of it.