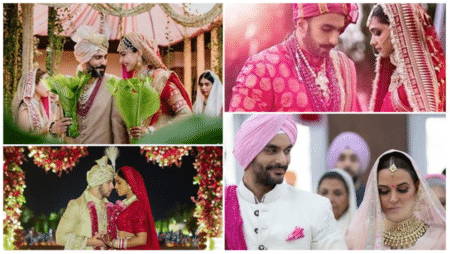 Bollywood celebs have the power to shine on-screen as well as off-screen, more so when they decide to put a halt to their ‘single’ status and tie a knot in holy matrimony!

2018 was an extremely happening year for some of our Bollywood stars. While a few decided to put a ring on their better-half’s finger, others decided to get hitched right away.

Sonam’s wedding was the talk of the town in May 2018 and surely for the right reasons. It was nothing less than a big fat traditional Punjabi wedding, Sikh style all the way!

The grand wedding was spread over various functions, namely; a traditional Anand Karaj ceremony, mehndi, sangeet revelry and finally a formal reception for all the close friends and family members.

Sonam Kapoor made a resplendent bride and all the fans can agree that red was totally her color! She chose a red Anurada Vakil lehnga choli and royal gold jewelry to compliment it.

And Anand Ahuja made a handsome groom by wearing a traditional sherwani with regal jewels and a totally picture-perfect kulla.

The Sangeet’s theme was ‘festive in white’ and all the Bollywood’s top stars were present.

Sonam Kapoor mimicked an angel when she paired her off-white ghagra choli with uncut diamond choker and perfect pearl jhumkas, karras and tikka.

Oh and they gave us couple goals on their formal reception day!

Bollywood’s glitterati was in attendance in awe-inspiring outfits as you can see below.

It is true that marriages are made in heaven long before we are born!

Priyanka and Nick Jonas decided to seal the deal on 1st December 2018 and are happily married ever since. They both resorted to a traditional wedding which took place in Jodhpur, Rajasthan.

The young American singer/ actor met his true love through a mutual friend back in 2016. The casual flirting turned into true love and finally shaped into a happy marriage.

Their 3 day perfect fairytale wedding included a mehndi, a musical evening, a traditional Hindu wedding ceremony as well as a Christian ceremony.

The mehndi commenced on Friday and the couple was super happy from the core as you can see in the picture below!

Sangeet was the real deal though! All the friends and family members performed elaborate dance sequence and the duo couldn’t help but shed pure joy!

Here’s a glimpse of the glittering glamour!

Wearing Ralph Lauren special ensembles, the couple spoke their vows on Saturday in a Christian ceremony.

And I bet their royal multiple tier cake tasted as delicious as it looked!

The newlyweds had their Hindu wedding ceremony too!

Don’t they both look adorable?

They again, flaunted their perfectly coordinated outfits on their formal reception in Delhi.

The duo appeared right out of a fairytale book!

This was one wedding affair everyone was waiting for and the couple, for sure lived up to everyone’s expectations! The much-in-love couple chose an international dreamy lake in Italy to read their vows and their wedding was rather an intimate affair.

Nothing but smiles for their Mehndi event in Italy!

This couple is truly made for each other!

A picture from their Anand Karaj ceremony

And here is a snap from their reception in Mumbai.

Anushka Sharma and Virat Kohli rather chose a hush-hush wedding celebration in Italy in December 2017.

While the wedding celebrations were spread over a week with events like Mehndi, sangeet, haldi, Anand karaj to the royal receptions; here’s a fun fact for all the fans. The couple had a panic moment!

As the couple planned to get hitched in frozen winters, what happened was that since the ice began to melt and drip out of the blue, the whole outdoor event had to be shifted to the indoor courtyard at the last minute!

Here’s a glimpse of their attires from their grand Mumbai receptions.

Checkout the star studded affair on their reception!

We wish all the couples a happy married life and an extremely bright future together! Ameen.