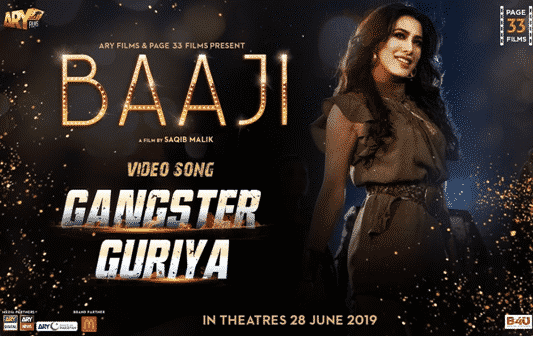 After ‘Billi’ in Na Maloom Afraad and ‘Chirrya’ in Challawa; we are now witnessing Mehwish Hayat rocking an item song as nothing less than ‘Gangster Guriya.’  On the other hand, her new-fangled number has swirled up several controversies, one of them being that she is rather Katrina Kaif-ish!!!

In the new Pakistani Feature Film ‘Baaji’ directed by Saqib Malik, Mehwish Hayat starred a special appearance in one of the 3 songs from the movie and she has obviously become the talk of the town!

The song ‘Gangster Guriya’ is completely different from the other two songs ‘Badlaan’ and ‘Khilti Kali’ and you definitely need to watch it as the entire song is a sight for sore eyes.

With praises and criticisms going hand in hand for Mehwish Hayat and the song all over social media, we are both amused and confused by the Public’s response.

Undoubtedly, Mehwish has done justice to the song’s title as she looks utterly gorgeous in all her looks. The cherry on top are the rocking moves that could light the dance floor on fire!

Here’s a video of the song for you to enjoy and see for yourself!

However, as the Ghairat Police and the Criticism Cops blare their sirens through our windows, we couldn’t help but listen to their cries!

Is it Mehwish or Katrina?

A lot of people claimed that the item song had uncanny resemblance to numerous Katrina Kaif’s item songs and we can’t help but simply agree!

The opening of the song featured Yasir Hussain just like the Bollywood hit and Mehwish hayat’s looks seemed to be just like Katrina Kaif’s in the song ‘Husn Parcham’ from ZERO.

I mean…way to be original guys!

Apart from the fact that this song is criticised for being a complete Bollywood copy, the fact that it is an item song is a lot more problematic.

Believe it or not, Pakistanis want Hamza Ali Abbasi to ban this item song based on his recent reviews on his show Pakistan Star. Hamza criticised a 16 year old girl for dancing on an item song during the auditions and pleaded to the producers and directors of Pakistani film industry to not put any item songs in their upcoming movies.

Surprisingly, the girl auditioning for the show chose one of Mehwish Hayat’s previous item songs!

Pakistani’s suggest that The Tamgha-e-Imtiaz awarded to Mehwish Hayat must be taken back as she does not deserve it. And we have heard this before too!

But should this happen?

Moving on, the song itself is considered to be catchy but the lyrics just don’t glue themselves to people’s brains! Written by Lollywood heartthrob Osman Khalid Butt and sung by Bollywood singing sensation Sunidhi Chauhan; it definitely is ear catching and has received millions of thumbs-ups from all over the world.

The lyrics being pro-feminist are applauded on and appreciated by all the strong, independent women of the country and it is considered to be an item song that has taken a different turn this time.

From choreography to lyrics to being the Creative Director of the song; Osman Khalid Butt has his fingerprints all over the place and we can’t help but appreciate his efforts. Truly!

With the release of a Blockbuster film Baaji, that is a comeback film for Lollywood sensation Meera along with famous stars such as Amna Ilyas, Osman Khalid butt and Mohsin Abbas Haider; we are excited to see how this movie impacts the entire audience!