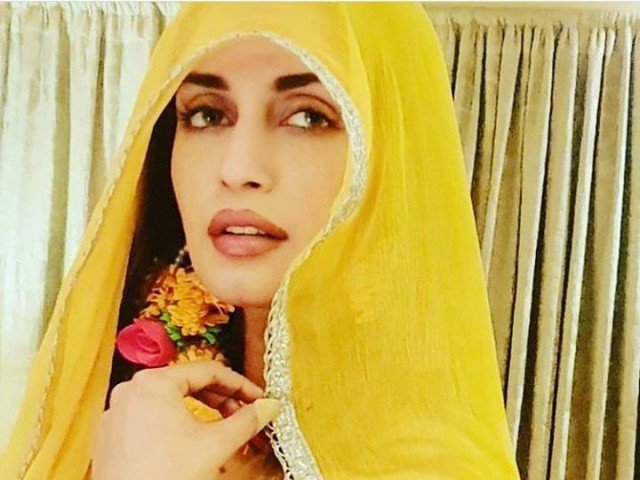 One of the highest remunerated actresses in Pakistan, an international super model and Lux Style award winner Iman Ali is no doubt, a diva!

Debuting in the critically acclaimed Pakistani feature film Khuda Ke liye in 2011, she has been rather absent from the scene since appearing in Mah-e-mir in 2016.

Being the talk of the town in February 2019, Iman Ali’s wedding celebrations have been plastered across the entire social media and her fans are loving it!

Not the biggest wedding celebration you will talk about, nonetheless since she was bursting with tears of joy, dancing and singing merrily; she truly shattered the stereotypical shy brides of Pakistan.

The celebration kicked off with a Dholki, Nikkah-Shendi followed by a grand Mayoun, and finally a Valima Reception.

Her Nikkah was a high spirited event where all the industry bigwigs gathered and participated with full energy. Ali Zafar, Farhan Saeed, Urwa Hocane, Sarwat Gillani, HSY and Umair Jaswal are a few renowned names to begin with!

The highlight of the event was the outrageous Haq Mehr (alimony) set at rs25 million!

Right after the couple uttered ‘Qubool hai’ 3 times, the star studded affair turned into a glamorous party where all their friends and family members danced the night away!

Going for a simple look, Iman Ali was clad in a traditional yellow ghaagra choli with a matching yellow duppata.

The ensemble looked even better with the flawlessly complimenting jewelry, especially the glass bangles.

The groom however chose a plain off-white sherwani with a maroon inner shirt paired with traditional khussay, perfect for the nikkah-mehndi festivities.

Her Mayoun was no small feat either!

Attended by close friends and family members, the whole event was glitzy and super fun. The best part was Iman Ali not shying away from singing and dancing!

Farhan Saeed and Urwa Hocane attended all the functions!

All the wedding festivities came to a halt with the concluding event of Valima which was attended by crème de la crème of Pakistan. Ali Xeeshan, Ali Zafar, Umair Jaswal, HSY, Yasmin Hashmi and Zara Shahjahan are a few celebrities who were invited amongst others.

Also, pairing the entire ensemble with a maroon side-dupatta got her full marks in style!

For those of you who are not aware, Iman Ali’s beau Babar Bhatti is the late grandson of Major Aziz Bhatti (shaheed) who received Nishan-e-Haider for attaining martyrdom in the 1965 Indo-Pak war.

For her big day, Iman Ali chose none other than Shahzad Raza (Ather Shahzad) as her makeup-artist who did a fine job in dolling her up.

While she kept her makeup minimal and in totally earthy shades, we are sure she didn’t need an extra hand for that radiance and glow she had put on all week long!

Irfan Ahson and his team also did a splendid job in capturing the right amount of memories through their cameras. Check the highlights here:

The team of Curryflow wish the sweet couple a joyful marriage and a happily ever after!