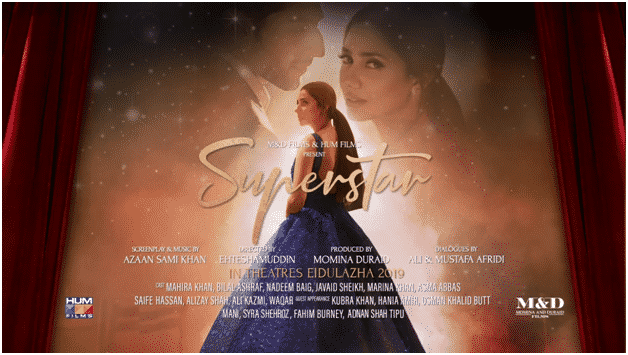 I am a hopeless romantic at heart and I can’t help it! Every time I hear a sweet, romantic song, my heart skips a beat and yours will too when you hear Atif Aslam’s latest song for the movie, Super Star!

Unbelievably if this doesn’t do the trick, then the beautiful love ballad, Bekaraan, by Zeb Bangash and Ali Sethi is sure to melt your heart.

Although numerous movies are slated to be released on Eid-ul-Adha this year, Super Star has been the most anticipated one so far. (According to the Pakistani fans) With Mahira Khan leading the show, the feature film is bound to garner a lot of interest amongst cinema-goers.

Let’s not forget Bilal Ashraf, the male lead of this movie. Ticking all the boxes and that too, with a dimpled smile which is sure to make you go gaga over him!

The trailer launch specifically itself was a mega event and was attended by the super stellar cast of the movie and other notable stars. The reviews as well as the post-trailer release have been outstanding and rightly so.

The story-line is uncomplicated but it is the ace acting skills and directing that turns it around. Mahira khan portrays Noori, a girl from a simple background who aspires to be a super star.

Bilal Ashraf, on the other hand, is a born super star with everything handed to him on a silver platter. It is when the paths of these two collide that the story moves forward.

Do I need to mention that the chemistry these two share is awesome and definitely makes up for some swoon-worthy scenes?

Need I mention that Mahira khan has stolen our hearts with her beauty as well as her acting prowess and this movie is no different?!

Her amazing transformation from a simpleton Noori to the super star Noori has created a lot of hype!

That nonchalant flick of the pony tail, the eyes and the swirl are not going to let you down!

While I can go on and on about the star power of Mahira khan, let me tell you that Bilal Ashraf is the yin to Mahira Khan’s yang in the movie. Seriously, did anyone look at Bilal Ashraf’s chiseled six packs?

That is a success story right under your nose!

Music is an integral part of any movie and Super Star doesn’t disappoint at all. Azaan Sami Khan, Adnan Sami Khan’s son, has done wonders and this is definitely one of his finest works. Hence, the songs are worthy of listening on a repeat mode.

The director and his team have done a wonderful job. The cinematography has been lauded by critics. To say the least, the scenes have been shot well and the framing is equally wonderful.

Can I just say it again that these two make a superb on-screen couple?

Don’t we all just love spotting some cool cameos in a movie?

Well, Super Star doesn’t disappoint here. Although, the movie itself is star-studded, there isn’t a lack of star-studded cameo appearances either!!!

From the looks of it, beautiful Kubra Khan seems to be doing a dance number with the hunky Bilal Ashraf.

Then, we have cameos from Hania Amir and Syra Shehroz and must I add that they both look absolutely smashing.

Did we just also spot Osman Khalid Butt doing a dance number with our Noori?

This can’t get better than this! Till then, we’ll have to wait for Super Star’s release!